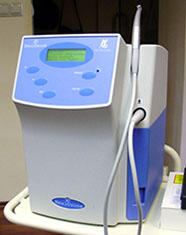 Ozone is a chemical compound consisting of three atoms of oxygen. It is formed in dentistry by a medical/dental ozone generator, which simulates lightning via an electrical discharge field, causing a temporary recombination of oxygen atoms into groups of three. (O3)

Ozone is a powerful oxidizer which affectively kills bacteria, fungi, viruses, and parasites at a much lower concentration than chlorine with none of its toxic side effects. One molecule of ozone is equal to between 3,000 to 10,000 molecules of chlorine and it kills pathogenic organisms 2,500 times faster.

The commonality of all pathogenic organisms is the weak antioxidant/enzyme systems in their cell membrane. Ozone will punch a hole into the membrane of the pathogen thus resulting in its death.

In reality dental tooth structure consists of millions of tubules held together by an organic substrate. These tubules can be colonized by microbes from the infected tissue in the main root canals. The vast majority of the microbes found in the tubules are obligate anaerobes, such as viruses, bacteria and fungi.

The steps of enhancing disinfection in the root canals begins after they are prepared to the proper size and taper. The canals are irrigated with ozonated water and then dried. The final step before sealing each canal is the slow insufflations with oxygen/ozone gas. This insufflations allows the molecular oxygen/ozone to travel into the canals, lateral canals and tubules, thus reaching and killing the microbes.