“When the LASER was invented in the 60’s, it was largely regarded as a solution looking for a problem. Today, we see LASER technology every day, in every walk of life, and the benefit to society is incalculable. Throughout history, we’ve quipped ‘Necessity is the Mother of Invention'; and inventors occupied themselves solving problems and building better mousetraps. Today, as in the case of the LASER, ‘Invention has become the Mother of Necessity.’ Technological advancement pursued for its own sake, only later to be repackaged into consumer products and marketed as … the ‘Next Big Thing.'”

The Aventura Endodontic Group is the only Endodontic practice in South Florida currently using this state of the art new technology for both conventional and surgical treatment of Endodontic and oral facial disease. Our office utilizes the Waterlase YSGG MD Laser manufactured by the Biolase Technologies, Inc. of California. It is fully approved by the United States Food and Drug Administration for treatment of diseases of the dental hard tissues (enamel and dentin), the dental pulp, periodontal tissue, oral soft tissue and maxillofacial bone.

This new laser technology works through the energy of ultra small droplets of water (hydrophotonic energy) by utilizing the action of the ErCr:YSGG laser light on individual molecules of water. These energized water molecules remove the organic debris and bacteria inside the root canal, and penetrate deep into the dentinal tubules without damaging the internal tooth structure that is usually caused by heat or vibration. The action of the Waterlase YSGG Laser drives atomized water molecules deep into the dentinal tubules with velocity, pressure and heat to more completely clean the complex intracanal anatomy of the root canal system. This inturn can provide an increased margin of clinical success for both the patient and the dentist. Here is how the utilization of the Waterlase YSGG Laser can enhance, improve and impact the outcome of conventional Endodontic therapy.

In 1917, Dr. William Hess perfused the dental pulp of teeth with India ink dye and then decalcified the roots. This picture reveals a complex interlacing, interconnected and interwoven relationship of the root canal system with the dental pulp tissue. Since then, this complex architecture of the dentinal pulp has been demonstrated numerous times. Studies have shown that it is almost impossible to remove all the organic tissue debris and bacteria from within the root canal system. Therefore, if we assume that we have met our mechanical objectives (cleaning & shaping of the root canal), an Endodontically treated tooth can still be problematic because we have not achieved our biologic objective of removing the organic tissue and bacteria. It should be noted that even the current medication (Calcium Hydroxide) used by Endodontists today is not totally effective against the microorganism (E. Faecalis) that is responsible for most of our Endodontic failures.

Historically, we have entrapped, entombed and embedded the remaining organic tissue and bacteria (smear layer) and still have been quite successful. If we imagine tooth structure to be like a cross section of a handful of straw held together with intracellular “glue”, than we can visualize the potential of bacteria and organic tissue being trapped in each straw (dentinal tubules). Thus, by utilizing the laser to its fullest potential effect, we are “Making Good Things Even Better.” In turn, this allows us to give our patients the finest Endodontic care that technology can provide.

The root canal is not essentially conical in nature as seen in the final Endodontic radiograph. Numerous dye studies have shown the actual “Root Canal” to be much more: a system – a series of webs, fins, lateral canals, deltoids, and dentinal tubules with organic debris in them. This complicated anatomy makes thorough debridement of the canal through traditional instrumentation alone even more difficult. At best, we are disinfecting the canal system. With laser Endodontics, we come much closer to actual sterilization of the canal. Attaining such a high level of sterilization significantly improves the long term prognosis for laser treated teeth. Moreover, from a holistic medicine perspective, achieving such a high level of sterilization promotes the patient’s overall well being. 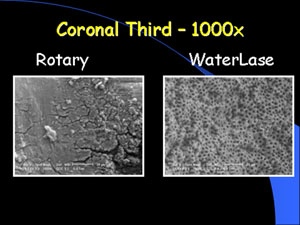 Another important benefit of this laser technology for Endodontic treatment is the high degree of patient comfort, both during and after the procedure. The laser provides pain free access to the root canal. If local anesthesia is ineffective or incomplete, a “Hot Tooth” can be opened without any further anesthesia, or patient discomfort. Because of the antibacterial effects of the laser, postoperative complications such as inflammation, swelling, and pain are reduced and the need for over the counter analgesics is minimized.

The laser assisted root canal treatment is an important departure from how Endodontic therapy is normally approached. It combines classic instrumentation of the canal system with the anti-microbial and bio-stimulatory effects of the laser.

The BioLase WaterLase Dental Laser utilizes hydrokinetic energy for the elimination of organic debris and microorganisms that lie deep within the confines of the root canal system and dentinal tubules. This combination of heat, light, and energized water produces atomized water particles that remove the smear layer and penetrate deep into the dentinal tubules. Studies have shown that the BioLase WaterLase Dental Laser penetrates 10 times deeper into the dental tubules than does more conventional biomechanical cleansing. Thus, the use of the laser for Endodontics allows us to more thoroughly cleanse the root canal and make it less antigenic and more biocompatible.